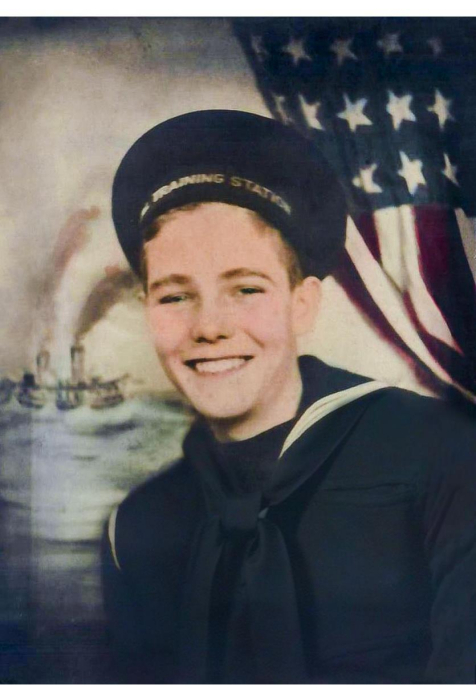 Howard "Scott" Magers, died at age 18 while serving in the U.S. Navy on the USS Oklahoma at Pearl Harbor on December 7, 1941.  He will be buried in Merry Oaks with full military honors, interred at age 97.
Scott was born November 3, 1923 in the Merry Oaks/Railton Community in Barren County, Kentucky to the late Carl (1885-1939) and Verda Magers (1889-1939).  He attended Carver School, a two-room schoolhouse at Railton where he completed the eighth grade.  He worked in his family's general store, assisted with a milk route and farmed with his siblings.
He was a member of Oak Forest Missionary Baptist Church and was baptized at the age of 14.  When his parents passed in 1939, he along with Wallace, James and Norma went to live with his brother Fred and his wife, Louie on New Bowling Green Road between Merry Oaks and Hayes.   He became very close to Louie's mother, Mattie Edwards of Smiths Grove and she was the last person to receive a telegram from him on December 24, 1941 after the attack.
He enlisted in the U.S. Navy in January 1941 at the age of 17 and served until he perished on December 7, 1941 in the attack on Pearl Harbor.
He is memorialized on the USS Oklahoma Memorial in Oahu, Hawaii.  He is also memorialized with a portrait in the Barren County Government Center.  In 1980, he was posthumously awarded a Purple Heart by the Citizens of Barren County.  He was entered into the Congressional Record in April 2021.
At the time of his passing, he was survived by three brothers: Fred (Louie), Wallace, and James, a sister; Norma, and a step grandmother, Lula Magers.
At the time of his interment, he is survived by a sister-in-law who knew him, Betty Magers, 91, of the Hays Community, who married his brother James in 1950.  He is also survived by nieces and nephews from Bowling Green:  James Douglas Magers (Joanne), Dennis Scott Magers (Shawn), and Lori Magers Coffman.  Kathy McChesney (Richard) of Smiths Grove and Susan Erskine (Jim) of Canmer.  He is also survived by several great and great- great-grand nieces, nephews, cousins and friends.
Expressions of Sympathy may be given to the Pearl Harbor History Museum, Pacific Historic Parks, 1 Arizona Memorial Place, Honolulu, Hawaii, 96818.
A grave side service will be held on Saturday, May 29, 2021 at 2:00 p.m. at the Merry Oaks United Methodist Cemetery, Merry Oaks Payne Road.  Parking and transportation will be available to the grave site.
Hardy and Son Funeral Home of Bowling Green is in charge of the arrangements.

To order memorial trees or send flowers to the family in memory of Howard Magers, please visit our flower store.