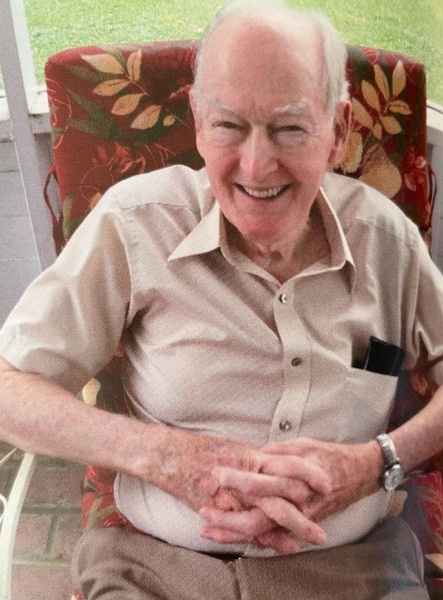 Carroll Spencer "Doc" Bevarly transitioned to his spiritual home on May 24, 2021. He was 92 years old and the cause of death was Congestive Heart Failure. He was at his home surrounded by his loved ones.
Mr. Bevarly was a resident of Smiths Grove for most of his life and moved to Bowling Green only after his health began to decline in order to be near his family.
Mr. Bevarly moved to Smiths Grove in 1960 to operate a pharmacy and his family soon followed. He retired on May 15, 2006 and said " You make one trip through this world, and you want to help all the people that you can."
To say he loved helping the good people of Smiths Grove is an understatement. For most of the 46 years his pharmacy was in operation, there was no 24-hour pharmacy in the area. Doc Bevarly would open his drug store to prepare and deliver life-saving medicine to those in need on holidays, weekends, and the middle of the night. For much of that time, there was no physician in Smiths Grove either, and when needed, Doc would administer first aid and dispense over the counter medicine for people and animals in need, thus the nickname, "Doc."
Doc admired and respected the talented farmers in Smiths Grove and farming soon became his passion. He purchased a farm just outside of town, remodeled the old farmhouse, moved to the country, and successfully raised cattle and crops. Not bad for a city boy from Covington, KY.
Doc Bevarly grew up in Covington, KY on the Ohio River, attended Holmes High School and University of Cincinnati. He is survived by the love of his life Margaret Ann Gwin Bevarly who he met at Union Station in Cincinnati when he was a part-time student baggage-handler for the L&N Railroad. They were married for 71 years. Mr. Bevarly was preceded in death by his loving parents Birdie Elizabeth Conley and Carroll Gordon Bevarly, one brother William Granville Bevarly (a pharmacist as well who dedicated his life to serving the people of Gallatin County, KY, his son William Carroll "Bill" Bevarly, and a granddaughter, Mary Mackinnon of Hermosa Beach, Ca. He is survived by two daughters Amy Disparte (Angelo) of Bowling Green , Lacey Dintzer (Daniel) of Palm Springs, CA, and three grandchildren, Peter Mackinnon of Bowling Green, KY, Benjamin Perlmutter of Los Angeles, and Madison Bevarly of Bowling Green, KY.
Doc Bevarly left this world a better place. In addition to improving the lives and health of many, he served his church, Smiths Grove Baptist and his community. He was Mayor of Smiths Grove for several years and was instrumental in improving the infrastructure there. The soda fountain at his Smiths Grove Drug Store was a beloved social gathering spot that offered delicious plate lunches and soda fountain delights, filling the tummies and entertaining many hungry local residents. Doc provided employment and benefits to many wonderful people over the years and appreciated each and every one.
He also learned to be very brave. In the late 60's when his pharmacy was plagued with a string of burglaries and his insurance premiums were rising, he took matters into his own hands. He installed a burglar alarm and would sneak into town in the middle of the night, with a shotgun to protect his property, while his partner Margaret called the police. For over 40 burglaries, he caught them red-handed and held the rotten crooks at gunpoint until the Kentucky State Police arrived, followed by the Warren County Sheriff's Department. His family often laughed and debated whether it was his desire to catch the crooks or his rising insurance premiums that motivated Doc to action, for all who knew him understood clearly that he was a frugal man. It was also well-known that Doc Bevarly was generous, honest, trustworthy, kind, and had a wonderful sense of humor.
Until the end he was grateful for the abundance in his life.
Visitation will be from 12-2 p.m. Friday at Hardy & Son Funeral Home, Bowling Green Chapel with a graveside service at 3 p.m. Friday at Smiths Grove Cemetery.
Flowers are appreciated, but in lieu of flowers, you may also make a memorial donation to the Smiths Grove Baptist Church Building Fund.
Because Carroll Bevarly dedicated his life to the service, health, and well-being of others, the family asks if you are unvaccinated for Covid 19, you honor him by wearing your mask.

To order memorial trees or send flowers to the family in memory of Carroll Bevarly, please visit our flower store.